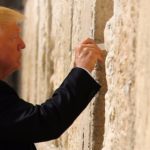 1. Yes, God loves the Syrians just as much as He loves people of other nations. But I beg to differ that the current Israel is of the “Synagogue of satan”. Certain individuals or groups may be, but not the whole of Israel. Israel should neither be highly exalted or looked down upon. Israel is still the nation through which the Lord Jesus chose to work through His plan of salvation.
“Now if some branches have been broken off, and you, a wild olive shoot, have been grafted in among the others to share in the nourishment of the olive root, do not boast over those branches. If you do, remember this: You do not support the root, but the root supports you.” – Romans 11:17
I have never witnessed anti-Israel preaching to bring about blessing. Both the Palestinians and the Israelis are guilty of wrong doing.

2. Whatever people think of Trump, he should be prayed for. If Trump is a TYPE of Cyrus (not actually Cyrus, just similar) as described in Isaiah 45…then I’ll remind myself of Psalm 105:15.
America (and much of the world) is too far gone spiritually to elect anyone who is the epitome of righteousness. Sometimes God uses the pagan to bring about His will. Below is one man’s testimony (says he believes God spoke to him). I cannot dismiss it because I have no scriptural reason to. Just something I take as possibly true.

“Trump shall become My trumpet to the American people, for he possesses qualities that are even hard to find in My people these days. Trump does not fear man nor will he allow deception and lies to go unnoticed. I am going to use him to expose darkness and perversion in America like never before, but you must understand that he is like a bull in a china closet. Many will want to throw him away because he will disturb their sense of peace and tranquility, but you must listen through the bantering to discover the truth that I will speak through him. I will use the wealth that I have given him to expose and launch investigations searching for the truth. Just as I raised up Cyrus to fulfill My purposes and plans, so have I raised up Trump to fulfill my purposes and plans prior to the 2016 election. You must listen to the trumpet very closely for he will sound the alarm and many will be blessed because of his compassion and mercy. Though many see the outward pride and arrogance, I have given him the tender heart of a father that wants to lend a helping hand to the poor and the needy, to the foreigner and the stranger.” – Jeremiah Johnson