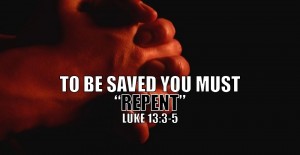 Just heard the news of a long time family friend’s passing. It is a common thing in times like these for many to question why; if the person who went on to the next life dies before 50, we respond “gone too soon”, and if over 50, we still want to believe that the person had enough strength for some more years. The thing is, the Word says we are appointed to die once and then face a judgement (Hebrews 9:27). Jesus proclaims the urgency of repenting while we have the chance in the following passage:

After sharing the gospel with some, I have been told “I don’t want to be saved now, sometime later.” I am sorry to say, but none of us know the appointed time. This is not a scare tactic; however I hope by the power of the Spirit hearts will be convicted, and those who are not yet in Christ Jesus will stop and think for a moment. Please stop and think about your eternity. Money, fame and the rest of the “carnivals”, “socas” and “dancehalls” of this world will pass away; even the best relationships on this earth will go too (Matthew 22:30), but our spirit will live on forever. The thing is, where are we headed? Are we prepared to spend an eternity with God, or an eternity separated from Him? He has provided a way to Himself, but those who reject Him in this life, will be rejected in the next. We reject God as number 1 in our lives when we place anything above Him. That includes a desire to hold on to a particular relationship and the sinful benefits of it (e.g. fornication/pre-marital sex [Galations 5:19-21] ) instead of obeying what the Word says in regards to it. Jesus said:

“For whoever is ashamed of Me and of My words in this adulterous and sinful generation, the Son of Man will also be ashamed of him when He comes in the glory of His Father with the holy angels.” – Mark 8:38

By the grace of God I am saved (I didn’t do anything to earn my way here, so I can’t brag), by that same grace so can you too be saved. I am not making this up, it is all there in the Bible. Please believe, your eternity depends on it.

May hearts be open to receive Christ Jesus today.