During the 2020 election, I was in some Facebook comments, and I read one person respond to another’s comment “abortion is not on the table”. As if the issue of abortion is not that important.

Actually it is. If it would only click in the minds of Christians that the blood of the innocent is to witchcraft as fuel is to an automobile. And we don’t even want to pray or engage in prolonged and deep prayer as part of our lifestyle or walk that we may counteract the darkness with the power of prayer.

But if it is one thing I believe without a shadow of a doubt, it is absolutely wrong to engage in child sacrifice. (Any form of murder for the matter, but that’s outside the scope of this post.)

Jesus found children to be so precious that He said:

“But Jesus said, Suffer little children, and forbid them not, to come unto me: for of such is the kingdom of heaven.” Matthew 19:14

Notice in the Old Testament God didn’t shy away from stating that the people sacrificed their children to Baal. It was something that concerned the heart of God and detestable to Him really.

They sacrificed their sons and daughters in the fire and practiced divination and soothsaying. They devoted themselves to doing evil in the sight of the LORD, provoking Him to anger. 2 Kings 17:17

And there’s a lot more where that came from! Many of us may not be in front of law makers to fight for the unborn. But we can be part of the battle through prayer.

If you are a Christian reading this and have had an abortion. Please understand once you have repented and asked for God’s forgiveness, you are completely forgiven. This post is in no way any condemnation. Just a call for many to realize the significance of abortion in the unseen realm. And ultimately, for us to mobilize even harder in prayer for these precious lives. 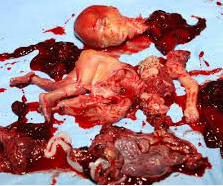